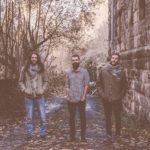 Emerging in 2011, Valerian Swing cemented their place as one of most interesting bands on the Italian heavy scene with their second album “A Sailor Lost Around The Earth”, and then at an international level with 2014’s ‘Aurora’.

2017 saw the return of Valerian Swing following a change of personnel that saw the exit of bassist Alan Ferioli in favour of baritone guitarist Francesco Giovanetti. The trio went and created their fourth full length album, during a period of personnel, artistic growth and maturity that has seen them gradually expand their spectrum of sound beyond the boundaries of just being ‘heavy’. This latest chapter has resulted in the album ‘Nights’ – undoubtedly their most accessible, rich and varied record to date.

‘Nights’ is a record that showcases Valerian Swing’s sublime technique and speed but unlike previous albums the aim was to focus more on the melodic construction of the songs and less on the extreme. The result is an album that explores more expansive post-rock, rhythmic and cinematic sounds.

Having played all over the world, including festivals like SXSW, ArcTanGent & Bergmal fest and having shared stages with bands of the caliber of Russian Circles, Boris and This Town Needs Guns, Valerian Swing has developed a highly impressive live performance that will surely blow your mind and melt your brain!