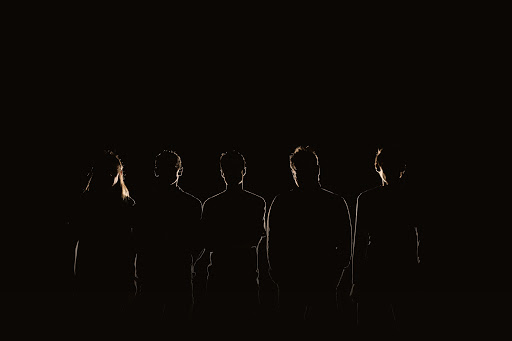 The Shaking Sensations is a Danish/Greenlandic, Copenhagen-based instrumental 5-piece powerhouse currently signed to the well-recognized Berlin-based label Pelagic Records. (home of Mono, The Ocean and Cult of Luna. The Shaking Sensations have expanded the classic post-rock constellation by the addition of a second drummer, allowing the band to develop a unique approach to the rhythm section and a fresh and unconventional take on instrumental rock music.

Cascades of distorted guitars, synthesizers and the two drummers pounding synchronically towards epic climaxes. Shimmering, beautiful, cohesive melodies tangled into each other, relieved by sheer chaos and sonic destruction, is the somewhat simple, but highly effective practice of this band. On record as well as live on stage, the band succeeds in tearing down boundaries with its high energy and all embracive soundscapes.

October 4th 2019 saw the release of ‘How Are We To Fight The Blight?’, an album that has been years in the making but definitely the time worthwhile. Its’ a 60-minute mind blowing collection of recordings which will be appreciated by listeners of Explosions in The Sky and Mono, as well as fans of Cult of Luna, Russian Circles and Isis. The record evolves around themes such as climate change, the current state of our planet and how we as individuals struggle towards an uncertain future. Reviews have been overwhelming and there’s no doubt that The Shaking Sensations have accomplished something special with this album.

The band has done 4 extensive European tours and shared stages with bands such as Russian Circles, And So I Watched You From afar, Mono and Caspian.