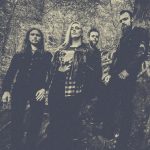 Formed in early 2015 in a dark cavern beneath the streets of old Edinburgh, a lead-heavy brew of old school Metal and the meatiest of 70’s classic rock emerges in the form of King Witch. Drawing comparisons ranging from Black Sabbath and Candlemass to Mastodon and High On Fire, the band’s debut EP, “Shoulders of Giants” quickly earned them a fanbase and saw them touring the UK and Ireland as well as playing festivals in Europe such as the prestigious Sweden Rock Fest, Muskel Rock and the Malta Doom Festival. The powerhouse vocals of Laura Donnelly give King Witch an unmistakable sound, while Jamie Gilchrist (guitars), Rory Lee (bass) and Lyle Brown (drums) provide a rock-solid and experienced backbone. Late 2017, King Witch signed to Listenable Records who released the debut album “Under The Mountain” on the 9th February 2018.
Promo + Rider