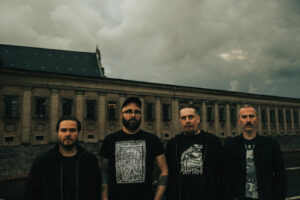 Copenhagen’s Anti Ritual return with their second offering and first full length album ‘Expel The Leeches’. Ten tracks of churning, pissed off, blackened hardcore, delivering a caustic commentary on the state of the world. While Anti Ritual draws on death metal, black metal, grind as well as hardcore to create its furious aesthetic, the band thematically emphazises the potential of aggressive music as being a political endeavour and furthermore its function as a cathartic cleanser for those involved.

Topics like modern capitalism, the many guises worn by the rising fascism, the fear of environmental collapse and the world we are leaving behind for future generations fuels this furious, yet dynamic record. The central drive behind the songs has once again been to find a constructive outlet for the less than optimistic outlook greeting anyone who cares to look up from their screens. These songs were written by Anti Ritual to help cope and to help put words to what surrounds us all.

As with Anti Ritual’s 2014 self-titled debut EP, the record is not meant as a pessimistic testament though. The sheer vitriol and passion poured into the making of these songs stem from a desire to make positive use of our anger and frustration. It is a way to ward off total apathy and the slow but certain descent into the indifference that covers every inch of postmodern society. An apathy that now threatens our very existence as a species.

‘Expel The Leeches’ is recorded and produced by the band itself, mastered by Brad Boatright (Nails, Sleep, From Ashes Rise a.o.) and bears artwork by Morten Grønnegaard and Nikolaj Borg.