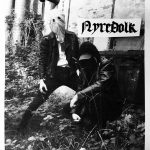 In november 2018 NyreDolk emerged from the gutters of Copenhagen and created instant hype in the scene. The band, who’s identity remains unknown, was picked up by Caligari records – live shows with Slægt and an appearance at the Metal Magic festival in Fredericia, Denmark carried fuel to the fire.

The debut on Caligari records contains four tracks of psychedelic madness, riffs that kills, drums designed to pound and vocals fleshed out to cut you off from your mortal coil..