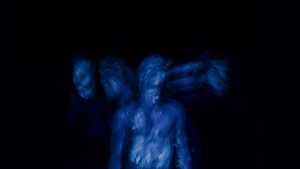 The Copenhagen based atmospheric black metal combo MORILD was formed in Copenhagen in January 2016. In september 2017, the band stirred the homely waters with the debut EP ‘VI’, and on February 1st 2019, MORILD released their debut album through Indisciplinarian.

The album was marked by a stunning and sold out performance at the national Danish aquarium “Den Blå Planet” (“The Blue Planet”). The concert was filmed and released in three parts via Cvlt Nation

From the beginning, MORILD has built its reputation as a strong live band with their intense and visually splendid concerts.