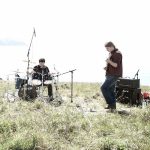 Into Orbit formed in 2013 in Wellington, New Zealand born from a collaboration between guitarist Paul Stewart and drummer Ian Moir. The two had played in several rock and metal bands together since 2009 before forming as a duo in March 2013.
Like their contemporaries Russian Circles, Jakob, and Explosions in the Sky, the New Zealand-based instrumental rock duo have a knack for creating emotionally affecting music through texture and melody.

While describing their music as ‘experimental rock’, Into Orbit’s sound runs the gamut from post-rock and soundtrack/soundscape, to metal, prog, noise and drone.

The duo have released two full-length albums (Caverns in 2014, and Unearthing in 2017), toured New Zealand numerous times and supported international acts such as Pallbearer, Alcest, Samsara Blues Experiment, The Ocean and Amenra.