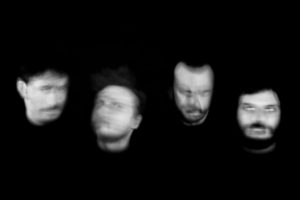 A R T O is an electrified ensemble playing instrumental cinematic gloomscapes, formed in Bologna in 2017. The eclectic sound of the band is the result of the encounter between four musicians coming from different musical experiences: Luca Cavina, bass player from the alternative mathcore duo Zeus! (featured in California-based cult label ThreeOneG) Simone Cavina, drums and electronics for the Italian art pop songwriter Iosonouncane; Bruno Germano, mastermind of the Vacuum Studio in Bologna, who recorded dozens of albums for bands like Zu, Mike Watt’s Sogno Del Marinaio and many others and Cristian Naldi, left-handed guitar in Byzantium Experimental Orchestra. A R T O’ s debut album “FANTASMA” was released in March 2018 by Dischi Bervisti/SangueDischi and it’s a ghostly trip featuring noisy guitars, blasting crescendos and dark ambient interludes, with a taste for gloomy melodies and refined arrangements and textures. The album features a cover from the legendary rock-in-opposition combo Art Bears, “On Suicide”, sung by Iosonouncane. In October 2019 they released a two-tracks EP named “O” (DischiBervisti/SangueDischi), an evolution of their evocative sound with a more psychedelic and groovy attitude. They played all around Europe and shared the stage with bands like Unsane, Melt Banana and Zu. In April 2019 A R T O had the opportunity to tour with Daughters as opening act for the “You Won’t Get What You Want” European tour. Promo + rider